Posted at 00:36h in Press by Nikoletta Skarlatos 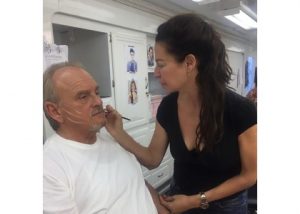 Tell us a little bit about yourself, how you got in the industry, your favorite show that you’ve worked on, and any awards that you might have won.
My first film “The BRAVE” was written, produced, directed by and starring Johnny Depp. This film had an amazing cast, including the luminary Marlon Brando. I had the good fortune to work directly under the very talented John Caglione Jr. who is without question, my first and most influential mentor in the world of film and prosthetics. Under John, I learned an enormous amount about all aspects of prosthetics, special effects, and facial hair application; in short, every aspect of being a cinematic makeup artist for film. The tools and knowledge that I acquired then has remained with me to this day.

Favorite show: Immortals directed by Tarsem Singh. Creatively fulfilling, incredibly artistic: I collaborated with an amazing team including the iconic Costume designer Eiko Ishioka. The makeups were inspired by ancient Greek mythology, ancient Vedic philosophy, Roman architecture, and our innovation in creating an ancient mythological subculture of our own. very gratifying! 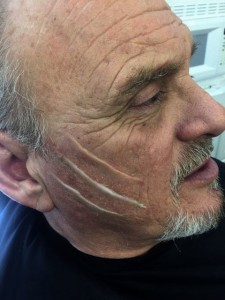 I have been nominated for a Saturn award for best makeup, 2011 ( Immortals), Artisan best period and/or character makeup: 2015 Mockingjay Part 1 and Artisan best special makeup effects 2014 for Catching Fire.

What tips or tricks do you have to share about using out of kit?
Work slowly and methodically in placement and application of the pieces. The application is so quick and user-friendly, it is a dream especially when under the gun with severe time restrictions. The possibility of repositioning the piece if there is the slightest error in exact placement is made easy by using 99% alcohol for adjustments. The piece can then be enhanced and perfected with one or two passes of stippled pros aide, and then painted.

What was the first show you used out of kit on?
The first show where I used OUT OF KIT was 2014 The Perfect Guy starring Sanaa Lathan and Michale Ealy. I have used OUT OF KIT on every project since then to this day. Most recently on Future Man for Sony/Hulu which is a smorgasbord of every type of makeup conceivable. From deep scarification to tattoos, to bruises. OUT OF KIT satisfied my every need and fancy. The pieces worked wonderfully on the Civil War epic the Free State of Jones. This film was shot entirely on location in Louisiana under extremely humid conditions. I used custom made and designed pieces for the main cast including scarification and wounds on Mahershala Ali, whipping scars for Gugu Mbatha Raw, and branding scarification for the slave’s faces and forehead’s.

How do your actors like wearing out of kit vs traditional prosthetic’s.
I have found that the actors with whom I have worked and used OUT OF KIT prefer it to traditional prosthetic pieces as these pieces are so quick to apply, easy wearing, light and non-intrusive. The challenge is as it is with all prosthetics: to remove the pieces properly. The removal is equally as important as the application of these pieces. And thanks to the actors understanding this, the entire process from application to removal is usually always very smooth.

What make-up do you like to use on out of kit?
I love to use illustrator to paint the pieces at first. It is very easy to manipulate and forms the basis for all of my painting and shading. I use other types of makeup additionally including Makeup Forever High Definition foundations. I like to seal with either Blue Marble or Final Seal.

What piece would you like to see out of kit sell that we currently don’t have?
I would love to see more stock pieces made for the back of the hand such as aging pieces, monster nails and other options to be made available.

What actor/actress would you like to work with that you haven’t?
The great French actor, Vincent Cassel.